What Does the Term “Emergency Lighting” Imply?

Emergency lighting is a term that refers to battery-operated or otherwise self-contained light sources that are meant to activate in the event of a power loss that results in poor visibility in a workplace.

Emergency lighting is designed to direct personnel toward the building’s exit safely. Depending on the nature of the facility and the possible risks and impediments that may obstruct a worker’s ability to make a safe evacuation, this may entail highlighting the exit or providing low-level illumination throughout the building. In certain professional settings, such as commercial airplanes, floor-level emergency lights may be employed to assist people in finding an exit.

Why is it Necessary to Have Emergency Lighting?

Emergency illumination is a lifesaver in the dangerous scenarios that this intricate background creates. Most importantly, it permits the safe, rapid, and effective evacuation of places and structures, not only in the event of a blackout caused by a power failure but even while sunlight and mains illumination are still accessible.

The contrasts made above emphasize the critical significance of emergency escape lighting in fire safety and how it is tailored and used on a case-by-case basis to the unique usage and occupancy levels of a given structure and/or location within it.

Where Should Emergency Lighting Be Installed?

When designing your emergency lighting installation, it’s important to keep the following in mind: 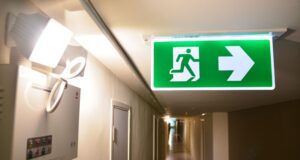