What Is HID lighting?

HID, or “high-intensity discharge” light bulbs and lamps, refers to a family of gas-discharge arcs which flow between two electrodes in a pressurized tube, causing different metallic additions to evaporate and emit tremendous quantities of light. The power initially enters via the ballast in the fixture holding an HID bulb. The starter within the ballast gives the first high-voltage shock of energy, which lights the HID bulb.

Once electricity is introduced into the HID lamp through the base, it’s directed into a sealed glass envelope (the arc tube) that contains gas and metallic salts. The gas aids in the first strike of the light. Once agitated, the gas heats and vaporizes the metallic salts. After all this happens, a swirling plasma is generated, which effectively is chemical combustion creating artificial light. This light is bright and strong enough to throw a large number of lumens a great distance.

How Did They Originate?

The fundamental technology underlying the gas-discharge lamp has existed for over 300 years. These same principles have inspired advancements in other forms of lighting including fluorescent and neon. Francis Hauksbee, an English scientist, is mainly credited with inventing the gas-discharge lamp. He demonstrated the device for the first time in 1705.

Back then, the lamp was filled with air, but it was subsequently found that the light output could be improved by filling the lamp with noble gasses such as neon, xenon, argon or krypton. Modern HID technology has raised light output even further by researching gas mixes and better electrodes, but the high-intensity discharge lamp’s functional fundamentals remain the same.

How Do They Function?

With contemporary illumination, the HID lamp operates by creating an electric arc between two tungsten electrodes enclosed in a quartz arc tube. The tube is filled with a gaseous mixture of metal salts. An arc is formed by a sudden rush of electricity, which is aided by the gas in the lamp. The arc subsequently warms the metal salts, resulting in plasma formation.

Ultimately, this significantly increases the amount of light generated by the arc, resulting in a more efficient visible light source than many conventional technologies such as incandescent or halogen lamps.

Where Do You Use HID Bulbs?

Generally, HID lights are employed in locations where the primary objective is to provide the most visible light per watt feasible. Streetlights, gymnasiums, warehouses, huge retail complexes, stadiums, and plant growth rooms are all common applications. In recent years, these lamps have also been utilized in several high-end automotive headlights. Since most HID lamps emit light which is either extremely cold white/blue or very warm white/yellow, they are often not employed in applications which need an aesthetic quality of light. Additionally, some HID bulbs need a lengthy warm-up period, making them unsuitable for situations where lights are switched on and off often. 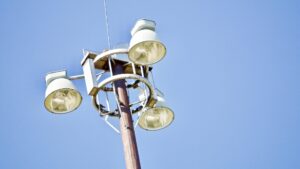 Greater brilliance on a low-energy budget

HID lights deliver much more lighting at a lower energy cost than incandescent lamps. They also emit more visible light than heat. Additionally, they give more illumination than other low-energy lighting options such as fluorescent light bulbs. Consequently, they’re often employed in vast open spaces such as stadiums.

The most visible lighting for driving

Not only can HID lights provide more light than ordinary bulbs, but they also generate light in the blue-white range, which is more visible to nighttime drivers. HID lights provide a brighter illumination of the area in front of a vehicle than conventional lights do.

For more information on the many advantages of HID lighting, visit greggelectric.ca or call us in Abbotsford at (604) 557-4734 today.