At the same line-to-ground voltage, a three-wire, three-phase circuit is often more affordable than an identical two-wire, single-phase circuit because it needs less conductor material to carry the same amount of electrical power. Three-phase electricity is mostly utilized for big power motors and other large loads.

Differences Between Single-phase and Three-phase Circuits

How are single-phase and three-phase power supplies different? In electricity, the phase relates to the way a load is distributed. Single-phase power is an alternating current (AC) power circuit comprised of two wires. Typically, one power wire is the phase wire and one power wire is the neutral wire, with current flowing between the power wire and the neutral wire (through the load). Three-phase power is an AC power circuit comprised of three wires with each phase’s AC signal spaced 120 electrical degrees apart.

Why Is Three-phase Superior? 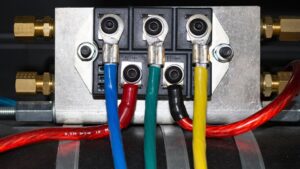 At the same amperage, a three-phase circuit has a higher power density than a single-phase circuit, which reduces the size and expense of the wire. Additionally, three-phase electricity simplifies load balancing, by decreasing harmonic currents and eliminating the requirement for large neutral lines. Additionally, it maximizes the usage of electrical capacity, resulting in greater energy efficiency.

More information on three-phase circuits can be found at www.greggelectric.ca or by calling your friendly experts in Abbotsford at (604) 557-4734 today.